I wanted to try drawing a map full of labels, but no place names. Instead, I would fill it with events and stories suggestive of the cultures living in the lands I depicted. This is the result: 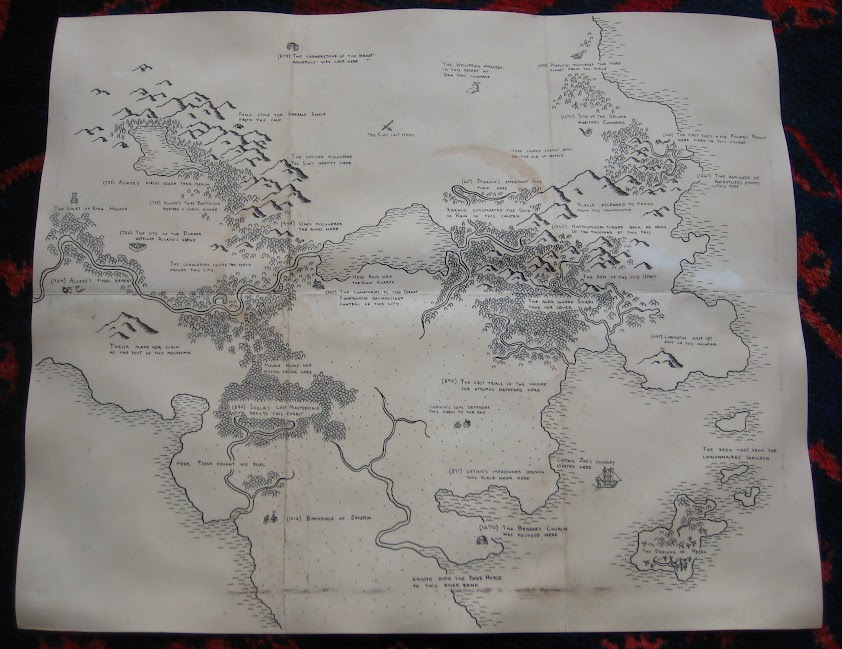 The Map of Legends

Much of the importance we place on a location comes from the stories associated with it. So, this map is covered in people and actions identified with places. Their struggles and triumphs fill the lands, drawing us into chains of associations.

Here camped Lastos’ army on the eve of battle. Sfola’s Last Masterpiece depicts this forest. Foalic stole the Emerald Shield from this cave. Here was the site of the Second Arbiter’s Congress – possibly related to the Fishers’ Revolt, the first shots of which were fired in this nearby village. 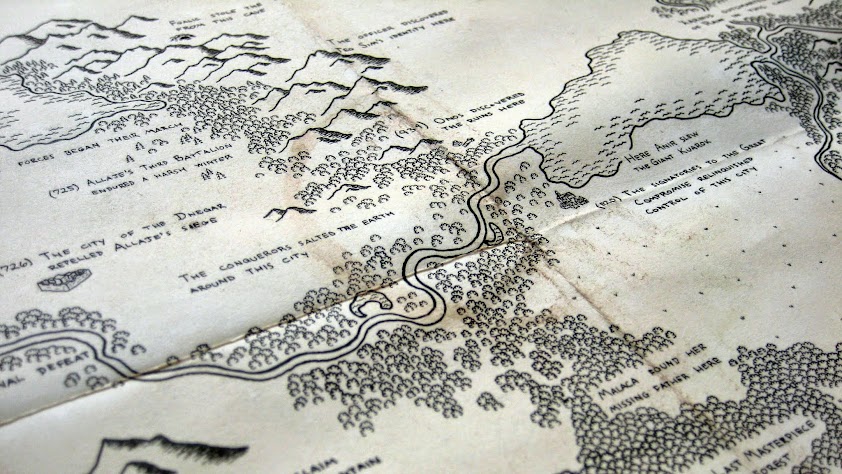 Lands of Allaje and Malaca

Looking at the labels, you may notice that roughly half of them have a preceding number in parentheses – what might appear to be a year. These labels speak of military campaigns, scientific exploits, political victories, founding of religions, and significant personages. The other half, without a corroborating date stamp, mention more dramatic exploits: giant creatures, heroic duels, stolen artifacts, and encounters with the supernatural. Are these myths of the local culture? Or do they hold some kernel of truth? 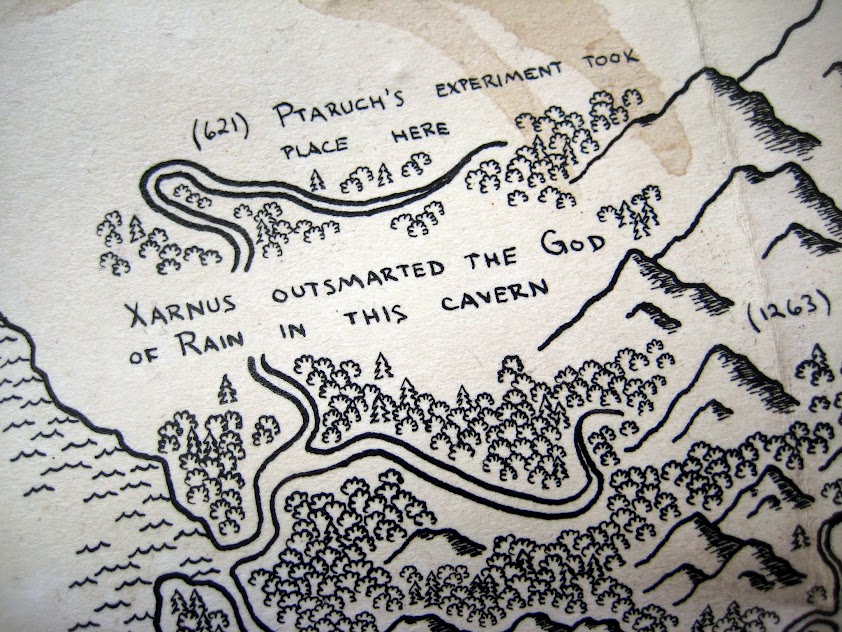 This map is also worn and damaged. The paper is yellowed, creased, and stained in ways that suggest use. The distressed appearance adds another layer of perception: through the map, we are connected with someone (someones?) to whom these historical events and mythologies were meaningful points of reference. 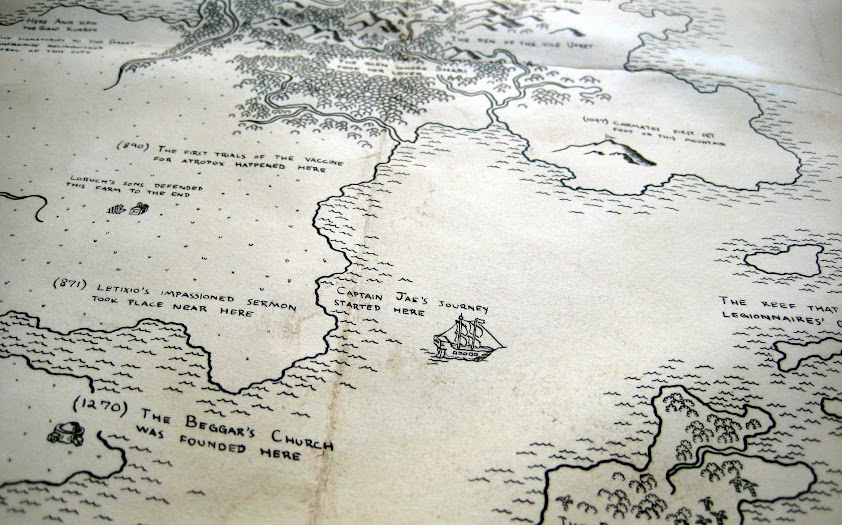 Some events have icons

…My, how bombastic, huh? Honestly, one of the things that made this map fun to plan and execute was that it’s the first one I’ve created for which I thought I had some interesting things to say through the artwork. The others have been accompaniments to world-building or more freeform artistic projects. I think I succeeded; though I led you through much of it in the paragraphs above instead of leaving the art to speak for itself. 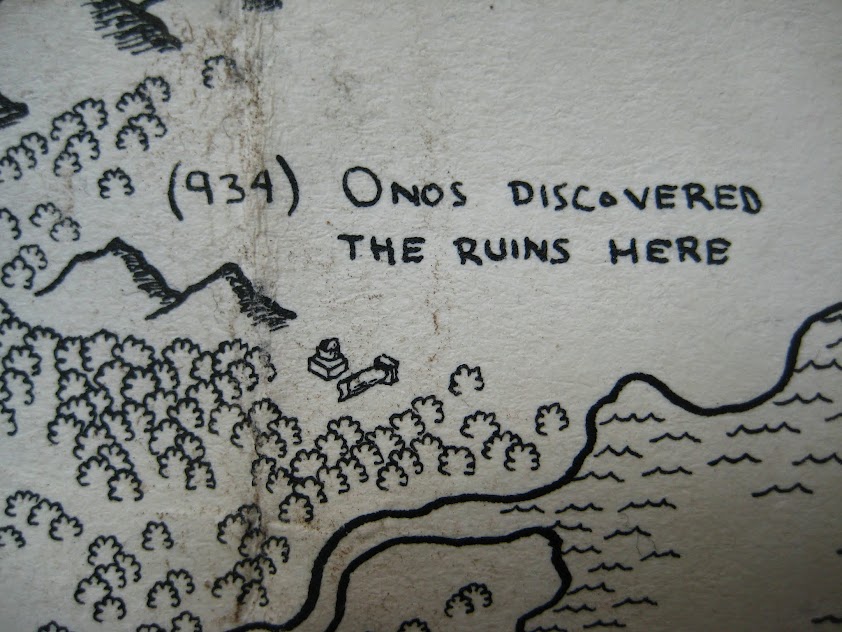 The standing base of the column measures a hair over 2 mm horizontally from corner to corner!

I really got to exercise my fine detail work here. This is still the same pen-and-ink drawing I’ve been doing, but on this map I really went to town with my superfine pen – especially on the icons accompanying some of the labels. I especially like the ship and a few of the cities. The trees (of three types: deciduous, coniferous, and palm) are tiny and fill large swaths of the page. I’m very pleased with how well they came out.

Speaking of the trees, I thought for a while that I might try to fill the whole page with trees, mountains, and towns. I wanted to cover the thing in symbols and labels. I’m glad I stopped myself, though! It turned out that with the “aging” I put the map through, I removed enough contrast from the page that the open areas like the desert below don’t stand out and cry for more detail. Instead, I think the finished image works well as an integrated whole. As I look at the map, my eye freely wanders in an arc from northeast to northwest, and down to the south. I don’t think any one spot grabs my attention more than it needs to. I can linger on Allaje’s military campaigns in the west or study Loruch’s farm all I like. 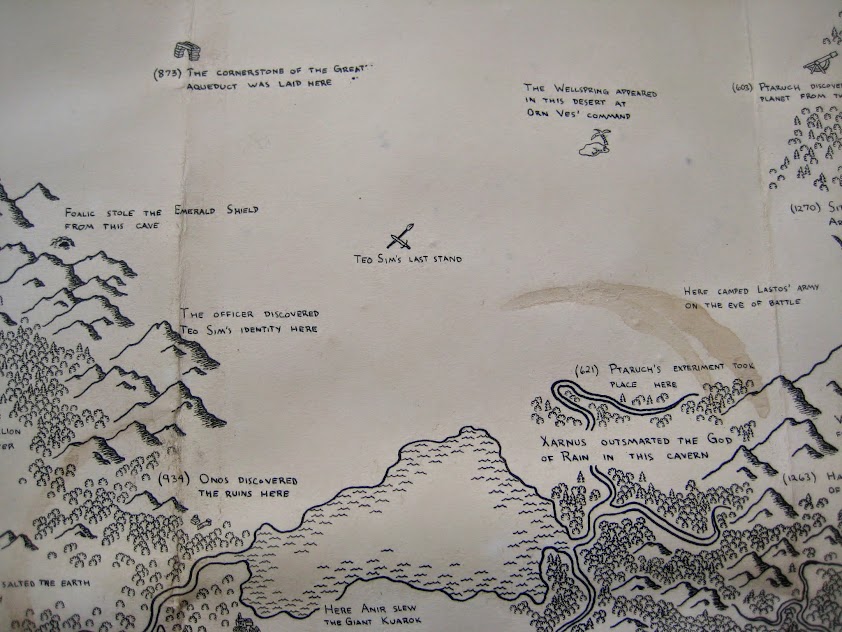 That aging, by the way: I soaked the whole map in coffee. Twice. The coffee darkened and tinted the page. (Except in a blotchy area in the east, near the den of the vile Ufret, where it didn’t penetrate through and left the original white color of the Bristol. Now the original color looks like the stain. I love it.) I had tested this beforehand on scraps, but talk about a point of no return! After it dried, I folded and creased the map. Then I made myself a cup of coffee, slurped it messily, and plunked my mug down on the page a couple times.

There are more images, and more of the story behind this map, in the Google+ album starting here. 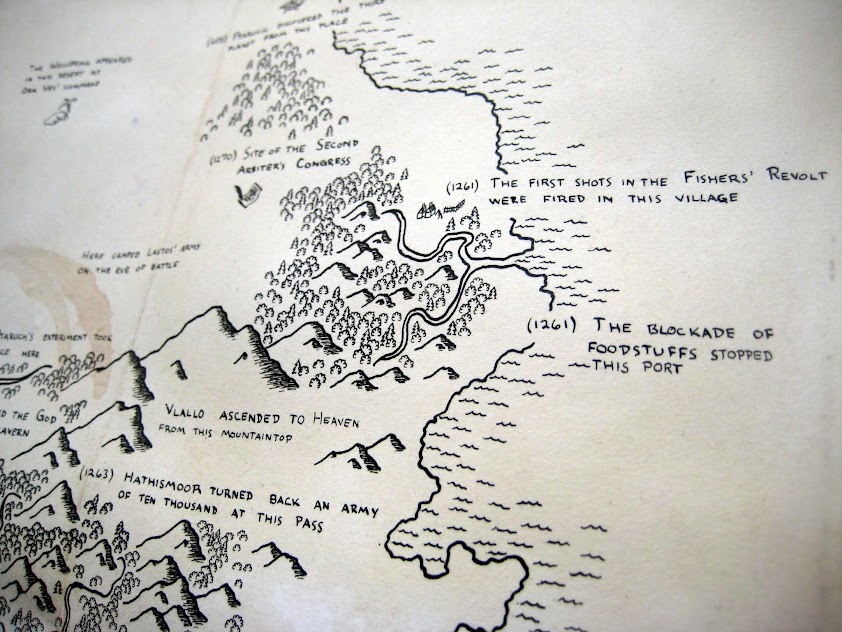