Europa, the second Galilean moon of Jupiter, has been my favorite planetary body for a long time. The reason I like Europa so much is that it’s a world whose orbital dynamics with Jupiter, its orbital resonances with the other Galilean moons, and its own rigid-body dynamics have a strong hand in creating its surface features – and giving it the potential to harbor life. It’s one of perhaps two or three extraterrestrial places in the Solar System where we might hope to find life. Europa is also easier to get to than Enceladus or Titan. As such, I think it ought to be one of the highest-priority exploration targets for robotic space probes. (Human exploration would be nice, too, but if you think radiation exposure on the way to Mars is hard, you don’t even want to consider putting people in the Jovian system!)

Thanks to magnetometer measurements and images from the Galileo mission, it’s pretty much established at this point that Europa has an icy outer shell over a global liquid ocean, with a rocky core on the inside.* The only question is how thick that ice shell is – I’ve read estimates ranging from 10 meters to 100 kilometers, with a pretty high confidence of ones to tens of kilometers. The ice shell gives rise to a number of interesting surface features. A particularly cool sort of feature, found with global extent across Europa, is the double ridge.

A prominent double-ridge feature on Europa, most likely a crack in the icy shell

Planetary scientists have a number of models for how these double ridges form, and they generally seem to agree that the ridges mark the locations of cracks in the ice crust. One especially well-established model suggests that these cracks occur when Jupiter raises tides in Europa’s ocean – just like how the Moon raises tides in terrestrial oceans, but much stronger, because Jupiter is frakking huge compared to Earth’s moon. Europa’s ice crust bulges out over the ocean’s tidal swell and then cracks under the incredible stress. (I like to take a moment to think about the mindbogglingness of that statement: the whole moon’s surface cracks. I’ve stood on a frozen pond when a crack pings through the foot or so of ice on top of the water – Just imagine standing on Europa when this happens!) Once a crack forms, the tides don’t go away. As Europa rotates, about once every three and a half Earth days, the tides periodically lever these cracks apart and squeeze them back together again. In this model, every time the cracks gape open the subsurface ocean gets exposed to space. The surface water boils and rapidly crusts over with ice, and when the cracks get smushed closed, all this ice gets crushed up and forced to the top and bottom of the crack, forming the ridges. The ridges appear in pairs because the crack opens up again after that. These double-ridge features are mounds of crushed ice flanking passages into Europa’s ocean!†

Dr. Richard Greenberg is a planetary scientist who thinks that these cracks in the ice shell might be potential sites for life to take hold. Unlike the rest of the subsurface ocean, they get exposed to sunlight, which means that photosynthesis could take place. The periodic in-and-out forcing of the crack would also drive strong currents, which is another energy source Europan life could use. (Those aren’t the only energy sources: other possibilities include thermal gradients in the water, volcanic vents on the ocean floor, or even induction as Europa travels through the Jovian magnetic field.) Of course, that life would also have to adapt to the crack opening and closing once every 3 1/2 Earth days!‡

We do at least know, from the Galileo mission, that these cracks often have accompanying veneers of organic (e.g. carbon-based) molecules and salts splashed onto the ice surface. This is why the cracks appear as brown stripes in large-scale context images. The crack/veneer combination suggests that there are organic molecules and salts in the Europan ocean, and that those compounds get pumped to the surface through these cracks.

So, let’s take stock: Europa is the only extraterrestrial world with a global liquid water ocean, there is a definite possibility for life in that ocean, and these double-ridged cracks are a possible gateway into the alien biosphere.

Well, then, let’s go diving! Read on for my concept system architecture for an ambitious Europan ocean-exploring mission, which I call the Ice Fracture Explorer.

The Ice Fracture Explorer, or IFE, would be a combination lander/penetrator vehicle that I imagine to be a little smaller than the size of one of the MER rovers. Ideally, several IFEs would accompany an orbiter to Europa. The orbiter component of the mission would contain instruments designed to give the planetary scientists on the mission enough information to select a few double-ridged cracks that are actively being worked open and shut by tides. The flight controllers would then dispatch an IFE to each of those cracks.

The IFE includes thrusters and landing pads to make a soft landing on the surface. Europa’s surface gravity is less than half of Mars’, so a soft landing should be easier than the successful Viking or Pheonix missions, even without the benefit of a parachute. The IFE landers would target the inside-facing slopes of the double ridges, as shown above. Each vehicle also includes cameras and instruments, and the IFE will pause on the inside of the double ridges to relay data back to Earth.

The goal of these images are to verify that the crack is opening and closing each tidal cycle, and to establish the timing of the cycle. Once the cycle is known, flight controllers will uplink commands to the IFE to begin the second phase of the mission.

The IFE will wait until the crack is closed, and then separate form the landing legs and inflate some gas-bladder cushions, causing the vehicle to roll down towards the center of the double ridge. Using its thrusters for attitude adjustment, the IFE will right itself, centered over the crack.

At this point, the gas cushions would deflate. Since the IFE has to operate in the middle of the double ridge, I imagine it will need to run off an RTG power supply instead of solar panels.

After righting itself, the spacecraft deflates the air bags

Next, the IFE would fire projectiles into the crushed-ice ridges on either side of the vehicle. These projectiles could be barbed, contain chemical flash heaters, or anything else design to make them really stick into the ice, because they would be the anchors for twin tether lines that unreel from the spacecraft. The IFE would also deploy a high-gain antenna for communicating with the orbiter overhead, since the mission will have to happen very quickly from this point on.

Anchored to the walls, and antenna deployed

Now, the spacecraft waits. Inside the IFE, the tethers would be mounted so that they unreel in unison. When the ice crack opens up again, the tether cables will support the IFE above the center of the crack.

The mechanism pays out both cables at the same rate

As Jupiter rises overhead wobbles around zenith, its tides will pull apart the two sides of the ice fracture. The IFE will be suspended in the middle as the crack opens, with nothing below it until the ocean 1-10 km down! At this point, the IFE will drop its deflated cushions and begin to deploy a smaller penetrator vehicle from its underside. The penetrator is a small, two-stage vehicle with two instrument packages, a hard-shell body, and a data line connecting it to the IFE’s main bus. 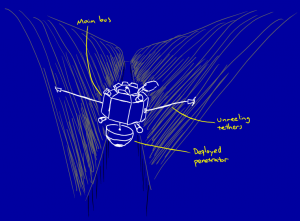 Hanging over the abyss

The IFE would drop the penetrator, letting gravity take it down into the fracture. As it falls, the penetrator will photograph the fracture walls in visible and infrared light. Data will be rapidly carried up the line to the main bus hanging overhead, which will relay the images to the orbiter

Eventually, the penetrator would hit the ocean surface. The water would have iced over, but the weighted penetrator with its reinforced lower body would smash through the ice and reach the liquid water below. At that point, a buoyant surface instrument package would separate from the lower penetrator, which would continue down into the water. The surface instruments would try to identify any interesting chemistry or biology occurring at the water surface, where photosynthesis might take place. The lower body of the penetrator would simply try to go as far down as it can, illuminating the depths and taking pictures.

The IFE drops two instrument packages, one that stops just under the surface and one that goes as far down as possible

The IFE will have perhaps less than one quarter of a Europa day to operate. When the crack closes, it will be crushed inside unless something exceptionally lucky happens or the ice shell turns out to be very, very thin. One possible mission design might call for the IFE main bus to reel in the tethers when the crack closes in an attempt to survive for a second day, but the penetrators will likely be lost.

If the Europan ice shell is indeed hundreds of kilometers thick, then a data line might not be the best solution for penetrator-to-main-bus communication. I don’t think radio or laser communication would work well across the water/vacuum interface, though. In that case, one possible mission profile might be to wait for the crack to start closing, when the water level inside the crack might be squeezed up towards the surface. However, there would likely be much less data available.

Finally, since the IFE would be crushed inside the fracture as it closes, it will have to relay all its data to the orbiter before it loses communications capability. The orbiter would have to be timed to be overhead for the IFE to relay all its data – perhaps in an eccentric orbit that spends the entire quarter-day over the crack, or maybe just coming into communications range of the IFE during its last moments, so the IFE can dump its entire data store and then beam images out as it can before it gets squished.

All this discussion highlights one fact: Europa is a unique challenge. Though it is one of the very few places in the Solar System that we can imagine harboring life, the mission design to explore the Europan biosphere is very difficult and requires many stretches of space technology. The requirements analysis and detailed design of such a mission would take a great deal of innovation and effort. Those are challenges that I would love to see the space program address, though – because the discovery of extraterrestrial life would have a profound impact on our science and society. Diving into the cracks in Europa’s icy shell may be our best bet at making such a discovery!

† For more information on cracks in Europa’s icy surface, check out:

‡ A couple cool articles on potential Europan biospheres are:

15 Responses to The Ice Fracture Explorer