I know I’ve liked to draw fantastical maps for a long time now. So, I should not have been surprised at how much fun I had producing a fancy version of a map for a world I’ve been working with for several years. I figured out techniques for drawing the shorelines, forests, and mountain ranges that I think were very successful. I used a lot of watercolor pencil washes, with india ink for lines.

Map of the Southern Continent

Still, though I like it as an image, the product isn’t a perfect map. I made the decision to try and put in all the physical features before any points of interest of placenames, with the intention of doing so in an overlay. None of my scratch tests for such labels worked very well; I ended up putting labels on the map in postprocessing on my computer. Not ideal, but at the same time, it came out okay.

I had such a great time producing the map over the course of a couple of weeks worth of coming home from work, making dinner, and then throwing NPR on while I sat down with my pen and ink. (It was a very meditative sort of endeavor.) I have also been keen on trying to improve the map. Fortunately for me, Fiancée loved the thing and requested that I produce a similar map based on a template which she supplied to me. Well, then. I didn’t need a second excuse to start. 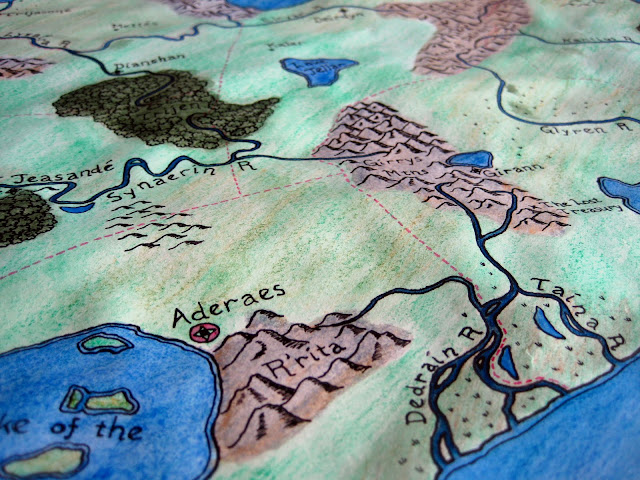 I worked primarily from the template; but I had leave to make some modifications such as putting detail on coastlines or changing river courses to be more realistic. I stuck with the same general techniques that worked so well for me on the first map.

This time, though, I planned a bit better. I noted the positions of the physical features; but I also included the major landmarks and indicated to myself where text labels would go. When I inked in the forests and mountains on this map, I left myself spaces for the labels. I practiced ink lettering on scrap paper, came up with a font style that I thought would be fitting, and this time put hand-lettered placenames directly on the paper.

I will be the first to admit that I didn’t succeed in all instances – this paper absorbed the ink in a very different way depending on whether there was a good base layer of pencil in place – but I like the results, in general. You can also see that this time I have added some carmine red ink to my repertoire, to add accents or denote features on the map (here, provincial boundaries from the template map). Another set of new features comes from a few special points of interest on the map. I will comment that inking a small symbol, such as crossed swords, on a large paper map comes with a particular set of challenges: ink is almost impossible to remove without leaving evidence, and so once I set about drafting such a symbol on the final image, I was committed to it! After all, I’d hate for one badly botched, critical item to ruin the whole work. (Happily, little goofs in the mountains and such simply add to the character of such an image!)

Just for grins, I threw on some other embellishments around the coastlines. You know: sea monsters and such. I’m particularly happy with this little guy.

I still have the map in my apartment and I’m thinking about whether I should add some kind of border, but I think I’m just going to let Fiancée mat and frame it however she likes.