I spent the week of the Fourth of July with my girlfriend’s family in Gatlinburg, Tennessee, right next to the Great Smoky Mountains National Park. I have driven through the southeastern United States twice, but never had a chance to get out of the car and look around much, so I was very happy to add a new area of the country to the places I’ve visited and go take a look at my 7th National Park. (Everglades, Zion, Grand Canyon, Mesa Verde, Bryce Canyon, and Petrified Forest were the previous six.) We landed in Nashville Airport, made a valiant attempt to dodge all the country music, picked up our rental car, and then drove though the countryside for four hours before coming in to Gatlinburg, driving up a mountain, and arriving at her family’s swanky rental cabin. (I shall skip over describing the übercheesiness that is Gatlinburg itself.) An impressive view greeted us out the back porch…

They don’t call them the Smoky Mountains for nothing. It was pretty hazy most of the time I was there, so we got a lot of views of faded ridgelines marching off into the distance, covered by lush deciduous forests. Of course, as this was a family event, we spent most of our time in that cabin and generally had a great time. But my girlfriend and I managed to make two highly successful jaunts into Smoky Mountains NP.

The first was a bike around the 11-mile Cades Cove Loop Road. This loop starts at a visitor center an hour’s drive into the park and circumnavigates a flat expanse of farmland in the middle of the mountains. Even the drive in was fun – it reminded me quite a bit of the drive from my home to Williams on Rt. 2, on the part around the Mohawk Trail. Makes sense – the Berkshires and Appalachians formed in similar orogenies, though the scales were far different. Anyway, a farming community has existed in Cades Cove since the first settlers made it that far west and persists today. The loop road winds along what were – to an Ithaca biker – gentle hills and afforded us a lot of panoramic views as well as some brief visits to historic buildings. (The Park Service calls the Loop Road a “moderately difficult” bike. That was definitely on account of the condition of the rental bikes, and that they tell you not to use the front derailleur – I think the one on my girlfriend’s bike was actually disabled. Fortunately, I had my multitool….) 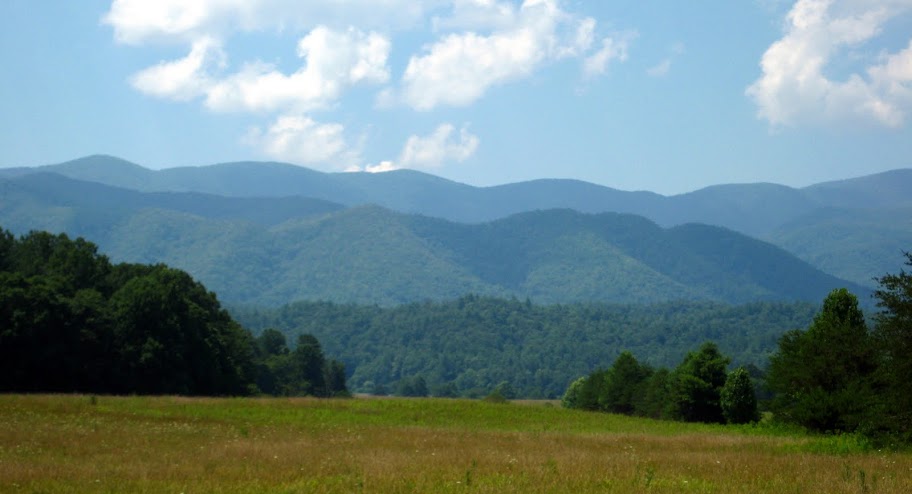 There were quite a few panoramic views from the road. Cars and cyclists share the road, and despite the many pullouts, traffic was slow as the people in cars paused to take photos. I was happy to be a bit more mobile and flexible!

At the far end of the loop was another visitor center built near the old farming community’s mill – which looked very picturesque among all the trees! I had a fun time playing with the CDHK high-dynamic-range script on my little Canon point-and-shoot to get a picture of the half-shaded, half-sunlit mill building: 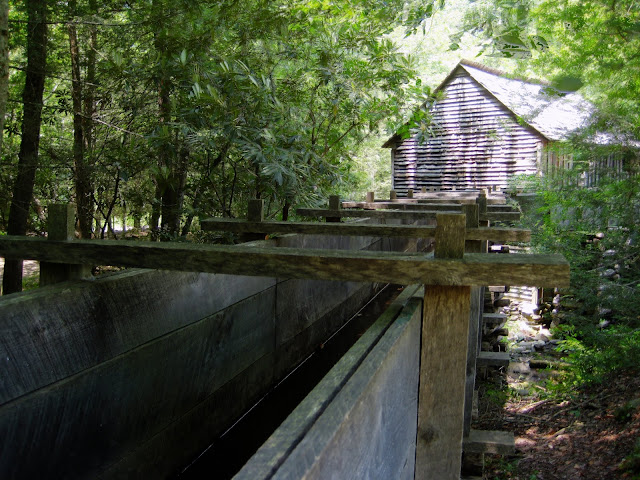 Inside the mill, they sell corn meal ground at the site. Of course, we weren’t going to hump any of that out the remaining 5 miles on our clunker rental bikes! After pausing awhile for lunch – which gave us an opportunity to improve my blood sugar, the water level in our bottles, and the worst of the derailleur problems on our bikes – we set off again. I was most interested in the scenery of Cades Cove, as after seeing one or two of the historic old houses, you’ve pretty much seen ’em all. However, there were still interesting historical tidbits to be had. Here’s a pretty cool grave we found in the cemetery around the Primitive Baptist Church: 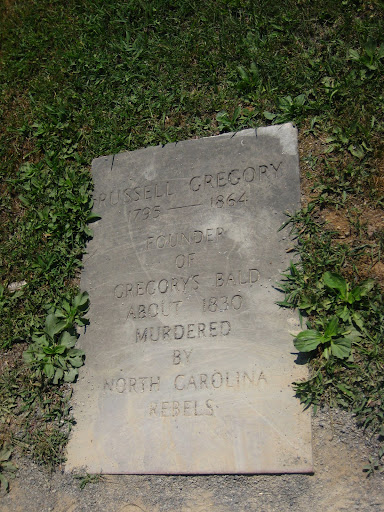 Our bike tour finished with a close encounter. On the way back, all the cars on the road suddenly jammed up, with occasional people pointing out of rolled-down windows. I cast a look off to one side and spotted a BEAR. I skidded to a stop, and it turned out to be a mother black bear with two cubs, rooting around in the shrubbery. They had warned us about bears at the visitor center, but I took those warning in the same way I take any warning about animals in parks – yeah, yeah, okay, if I see a bear I’ll be sure to keep that stuff in mind! Little did I know that they give these warning in the Smoky Mountains because you will probably run into bears. I took some grainy movies before they got too close for us to do anything but get back on the bikes and get going. We had no windows to roll up!

After the Cades Cove bike, we collapsed at the lodge. The next day, though, we were feeling intrepid enough to be looking at hikes in the park, and based on the description alone we picked out Chimney Tops trail. This was a big win.

Chimney Tops is a 2-mile trail to the summit of a mountain right next to LeConte Peak, the highest point in the park. The last mile of the two gets steeper and steeper, ending with a bare-rock climb. I, my girlfriend, and her cousin were very excited as we set off.

One of the first things to strike my about this hike was how lush everything was. I’m used to forests that consist large of trees and ground cover, like those in New England. Whenever I see a different forest ecosystem things seem a little funny to me. So far, the weirdest to me has been the ponderosa pine forest around the Grand Canyon, which consists of huge ponderosas and nothing else. Well, Smoky Mountains National Park is at the other extreme: solid green growing things from ground level up to the canopy. 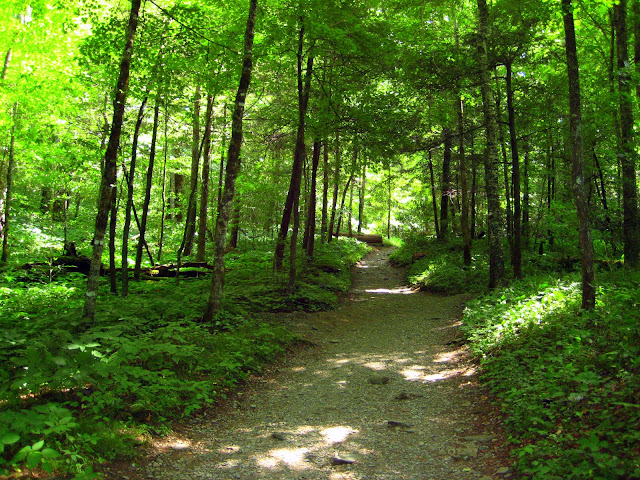 (Other great examples here and here.) We even managed to spot a Jordan’s Red-Cheeked Salamander in all that foliage – a salamander species found only in this National Park! Shortly thereafter, we almost had another encounter with a black bear, as we saw some fellow hikers hoof it down the trail to us and tell us that they were doubling back a bit to avoid a bear that had burst out of the undergrowth right in front of them. We didn’t see the bear – only some wet footprints a few minutes later.

Chimney Tops Trail reminded me a little bit of Angel’s Landing in Zion National Park – though the climates, geology, and trails had plenty of differences, of course – in that it ends with hikers climbing out onto a spur of rock that sticks out into a valley. So, as the hike got steeper and steeper, eventually it turned into this! 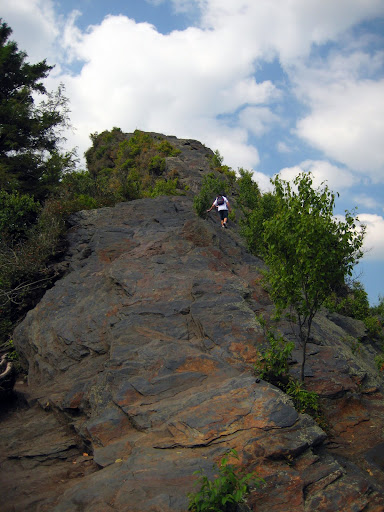 Pausing at a convenient stopping point partway up those rocks, I turned to one side and snapped the following panorama, a preview of what we saw at the very top.

Panorama near the top

Finally, after a bit of exciting scrabbling, we got to wedge ourselves into some crevices at the top and have a good look around. Scenic! (Click to panoramify.)

Have I mentioned that I love my little Canon SD1000, which fits in my pocket, has a nice panorama mode, and lets me take HDR photos with CHDK? In fact, the HDR tricks I’ve been playing with were wonderful up on Chimney Tops, because they let me combine exposures to get some good shots of the progressively faded mountain ridges staggering off into the distance over the near hills. One such example: 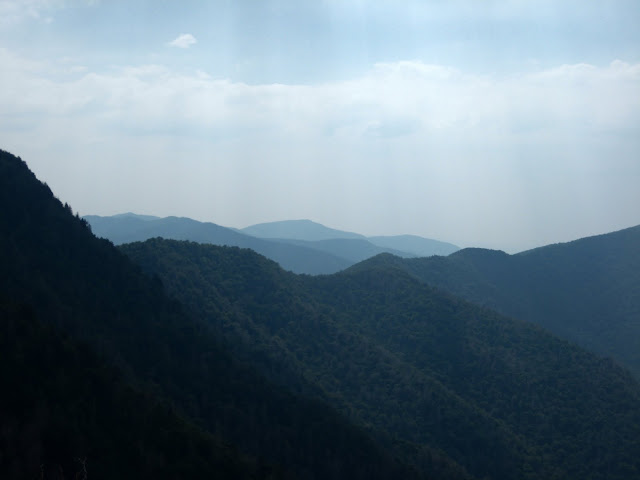 And another, capturing the tip of the mountain spur forming the Chimney Tops: 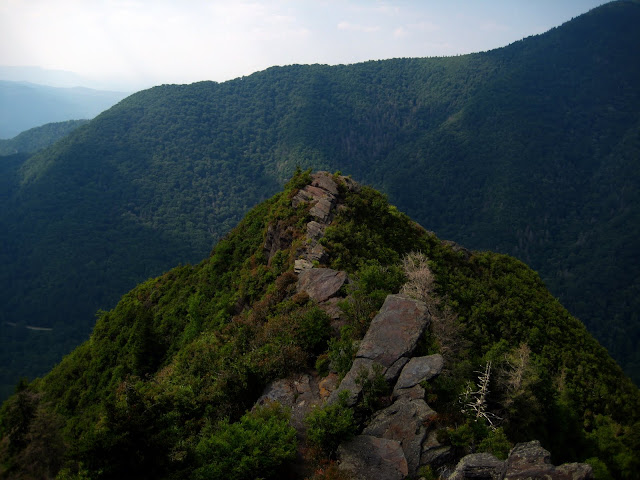 Under the shade of the trees it had been nice and cool, but as we came out onto the bare rocks it warmed up. As we snacked, sitting on the mountain, the sun was flirting with the edges of some clouds. Coupled with the haze and humidity, this meant that we got a pretty nice optics show of sunbeams blazing down on the distant mountains. I tried to capture some of that with my camera, too, but found it about as difficult as the one time I was in a position to photograph the aurora borealis. Still, I got a few nice images!

I even figured out how to postprocess the living heck out of one panorama to bring out the sunbeams without totally destroying the rest of the image. I quite like the result, below! You’ll want to click on this one.

Maybe next time, I’ll have to try and time that hike for sunset or sunrise!

After a good deal of gawking, it was time to head back. Of course, climbing up the rocks and climbing down the rocks are two different problems, and we were a bit slower picking our way down the steep surfaces. This is the best picture I got that gives a real sense of going down. Notice all the deformation in the tilted stratigraphy, with girlfriend and her cousin for scale. (The runner-up is this photo.)

I’ve gotta say that the Smoky Mountains were definitely worth a visit, and I’d happily recommend Chimney Tops as a good morning or afternoon hike. I like hiking, and I like our National Parks, so I was happy for the chance to get to see another in an area of the country I haven’t been to.That’s one of the things I like best about the United States: we’ve got so much stuff within our borders, but everyone uses the same money, understands English, and follows the same road signs. And sometimes we even feel like protecting what we have, so we can go into these spectacular places!

See all my pictures on Picasa – I had fun tweaking them all on the plane back to Ithaca!

Joseph Shoer
This entry was posted in Geology, Photography, Travel. Bookmark the permalink.