Recently, ABC’s new series “Defying Gravity,” starring Ron Livingston of “Office Space” fame, has caught my attention. All the current episodes (1-6 as of this writing) are available on Hulu. I think it’s been interesting enough for me to keep following it. I have a couple points of interest about the show:

First, I am impressed with how much the show’s creators, writers, and artists have paid attention to the probable operation of a near-future space program. Of course, the show makes the usual sci-fi physics gaffes. “Defying Gravity” goes to unusual lengths to rationalize shooting a space series in terrestrial gravity (“centrifuge” is a fine explanation for me, “magnetic nanospray” and “electrostatic nanofibers,” eh…not so much – novel attempt, though), there are silly numerical issues like pressurizing a spacesuit to 5 atm (never mind the entirely ridiculous  idea of a human-rated “Venus suit”), and this show, like almost every other sci-fi, doesn’t come close to getting the physics of tethers right. However, I’ve just come from a summer at NASA Johnson Space Center, and I am incredibly impressed with this show’s depiction of mission control, the MCC/spacecraft communications, space jargon, uniforms and suits, the art of the spacecraft interior, potentially realizable space technology, and the fact that they do depict zero gravity with much greater frequency than most other sci-fi. From my (albeit limited, but still quite extensive compared to the general public) exposure to the astronaut office at JSC, it seems to me that this show’s depiction of the Astronaut Office and the experience of being an astronaut is about as spot-on as it could be. 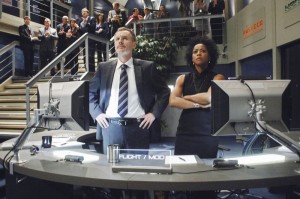 Second is the point that this series was apparently, according to Wikipedia, pitched to the networks as “Grey’s Anatomy in space.” I couldn’t care less about the soap-opera-y who’s-sleeping-with-who dynamics of a show like that, but there’s plenty more going on that make “Defying Gravity’s” characters fun to watch. In contrast to shows like “Star Trek: (pick your favorite)” – which highlights some aspect of human nature or morality by having our intrepid characters encounter a planet peopled by a species that embodies a single, streotypical trait – and “Battlestar Galactica” – which explores the interactions between its characters against the backdrop of larger questions about what it means to be free, human, just, etc. – “Defying Gravity” is a show almost purely about the interactions between the characters and how their past experiences impact those relationships. Certainly, Trek and BSG include those elements, but “Defying Gravity” removes most of the external influences on the characters. (Not all, of course, because external stressors are great for getting characters to look at themselves or their companions.) Now, using a long-duration spaceflight with astronauts cooped up in close quarters, millions of miles from assistance, communication, or rescue to set up a character study is absolutely nothing new to science fiction in general (see, e.g., Poul Anderson’s Starfarers and Tau Zero, many of Ben Bova’s novels, and the beginning of Kim Stanley Robinson’s Mars saga) – but it is new to mainstream movie and television sci-fi. Fortunately, these are pretty interesting characters, they seem like three-dimensional people, and the show so far has been about how they each come to terms with their own past at the beginning of their six-year voyage. I definitely like seeing the space program as the setup for such drama. Which brings me to…

Last, and certainly not least, this show is extremely pro-space. (Just listen to Maddox Donner’s voiceover monologue at the close of the pilot episode!) I love what it says about viewing audiences: the mainstream media is comfortable with, and thinks the public is comfortable with, a relationship drama set on a spacecraft against a background of mostly-real physics and operations. It helps to make astronauts feel not just like heros, but like real people. As if – gasp – we could grow up wanting to be an astronaut and hold on to that dream even if we don’t picture ourselves as the perfectly polished John Glenn or Neil Armstrong type. We can be good at things, bad at things, have our own flaws, and still go become astronauts, mission controllers, and engineers. That is a message that I really, really want to get out into the public. If we can get the more adult audiences likely to watch “Defying Gravity” thinking that it’s okay to keep dreaming to be an astronaut, then we’ll raise a generation of kids who are willing to hold on to that dream and become the scientists, engineers, and space explorers of the future. Augustine Commission, NASA management, and politicians, please take note!